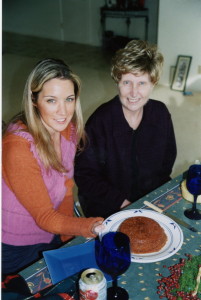 On Mom’s last Christmas, we recreated all the nostalgic sights, sounds and smells of her childhood memories in England. It felt like a Charles Dickens’ Christmas. We burst open Christmas “crackers,” boxed party favors, and topped it off with Christmas pudding, a traditional English dessert.

As the holidays approached, I opened the kitchen cupboard and pulled out the green box holding all my mother’s holiday recipes. I carried it like you might carry the family jewels into her bedroom where she lay on a hospital bed. We’d learned before Halloween that the chemotherapy stopped working, and the IV keeping her alive could be discontinued when she chose to go into hospice.

On the last Christmas shared with our Mom, my brother, Ryan Carson, 19 years old, cooked a traditional English roast to evoke the scents of English Christmas past for our Mom. When I interviewed Mom, the day after, she said, “Having Ryan do the cooking, that was something special.” She was truly proud of him.

Since my younger brother and I knew the upcoming Thanksgiving and Christmas would be the last with our mother, Linda Carson, we wanted them to be special. Our holiday festivities usually revolve around the dinner table, but my mother couldn’t eat because the cancer had blocked her intestines.
I sat on the edge of her bed and pushed the green box toward her.
“What are you doing with that?” Mom asked.
“You’ll have to teach me how to make Thanksgiving dinner this year,” I said.
She opened the box and smiled proudly. At 26, I finally realized that traditions had the power to link generations and bond families together after a death.
On Thanksgiving morning, Mom became the director of the show. As the producer, I learned the secrets, shortcuts and addenda to her recipes. Dinner turned out just like Mom’s. Usually Mom said the prayer. On impulse, I did it.
After, I suggested we each share two things we were thankful for so that eating wasn’t the only activity at the table.
I began to feel a changing of the guard.
Usually during the first weeks of advent, Mom got the decorations from the garage, collected our Christmas lists, opened the advent calendars and transformed our home into a luminescent winter wonderland. She played carols, read “Twas the Night Before Christmas” and the Nativity story. I could hardly fathom Christmas without her.
I needed to know the roots of these traditions. We talked about her fondest memories in England — waking up Christmas morning to the sound of wrapping paper rustling in a stocking at the foot of her bed.
I was struck when Mom said that most of the advent traditions I’d grown accustomed to started after my parents divorce when I was 7, my brother’s first Christmas. It dawned on me that the magic of Christmas was born of my mother’s attempt to deflect her grief and my father’s absence. 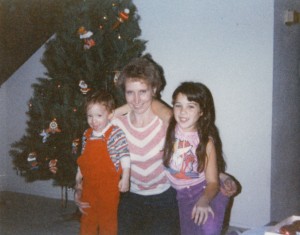 Reflections of Christmas past, my Mom, Linda Carson, my brother, Ryan Carson, and me in 1983 on the first advent after my parents’ divorce when Mom began to transform our home into a winter wonderland during the advent season and created the family traditions that live on today, even in her absence.

“I began to cling onto traditions much more once my life was brought to a standstill after the divorce,” Mom said. “I tried not to focus on the emptiness, the bleakness.”
After our talk, I had the inspiration to turn our darkness into a joyous celebration, just like Mom did. I retrieved the boxes of decorations. Mom gave me the address of the tree lot we’d gone to since I was a child. Since I love a Noble fir and she loves a Douglas fir, each year we traded off. I found a hybrid tree — a cross between a Noble and a Douglas. It was the perfect tree to canonize this last Christmas.
I invited Mom to join me as I decorated. At first she resisted, but with some cajoling and the help of morphine for her pain, I helped her down the stairs. As I placed ornaments on the tree, she shared the story of each one.
On Christmas morning, Mom woke up to the crackle of gifts in a stocking at the foot of her bed. She followed the sounds of clanging pans that grew louder as she descended the stairs. Her eyes widened at the sparkling lights in living room. The “Christmas Song” played as she turned toward the clatter and gasped. Ryan, my then 19-year-old brother, whirled around the kitchen preparing all the dishes to accompany the roast, decorated in fresh herbs and painted in English mustard.
At the dinner table, we burst open Christmas crackers, an English tradition that Mom had reminisced about. Loud bangs triggered an explosion of wrapping paper, cardboard, and toys spraying across the table. We slipped on our silly crepe-paper crowns. Then I asked each person to share a Christmas memory. I started.
“I’d have to say waking up at dawn every Christmas to the crackling of wrapping paper and gifts in my stocking at the foot of my bed is by far my favorite memory,” I said.
“I agree,” Ryan said.
We toasted Mom, followed by dessert — English bird’s-eye custard and Christmas pudding.
The next morning when I woke up, Mom called me into her bedroom.
“Denise, I want you to come in here with your tape recorder,” she said.
This is what she said, “Usually I am the one who plans everything and does everything, and this time…my daughter, from November on, was rushing here and there buying gifts, wrapping gifts and planning the food…Everything I would normally do, she did it and did it with style… Having Ryan do the cooking, that was something special.”
She proudly recounted his exquisite culinary creations.
“Well, I just wanted to get that down so we wouldn’t forget, because it was so special.”
My mother passed away in 2002 about six weeks after that memorable Christmas. For my brother and me, advent continues to be a special time when her spirit lives on in each ornament hung on the tree, the twinkling decorations turning my home into a winter wonderland and the Christmas crackers we burst at the dinner table.
I can almost hear her voice in the Christmas carols we play and when I read “‘Twas the Night Before Christmas” to my 2-year old daughter. I believe Santa Claus will be leaving a stocking full of gifts at the foot of the bed for her.

Celebrate last holidays
• Find out which holiday traditions are meaningful to your loved one.
• Let your loved one know you will carry on special traditions and stories to the next generation.
• Ask your loved one to coach you on family recipes.
• Invite family and friends to bring a memory to share.
• Encourage people to share, e.g. making a wish for the person next to him.
• Bring new traditions that will honor your loved one.