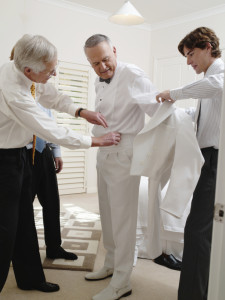 Preparing to appear at the grandest celebration of his life.

Your 15 minutes have arrived. Roll out the red carpet. A living funeral is the grandest celebration of your life with a twist—you, the honoree, are living and present to hear the eulogies, praises and farewells given before death. This gathering of family, friends, neighbors and colleagues is a ceremony or party to celebrate a person with a life-limiting illness. If you know your time is short why wait?

Mark Twain, the astute observer of human behavior and one of the greatest authors in American history, portrayed his fascination of eavesdropping on his own funeral in the novel “The Adventures of Tom Sawyer” published in 1902. The protagonist Tom Sawyer said in the midst of the fanfare, “It was the proudest moment of his whole life.”

In researching my book Parting Ways, I’ve come to realize that these pre-death rituals that seem rare are on the rise from the east to west coasts. People are toasting and roasting family members and friends with limited time left. Some look like a cross between a wedding and funeral. These formal or informal get-togethers take place at a home, community center, house of worship, hotel banquet hall, a favorite restaurant, a theater, or any place that would honor the person. I’ve seen the honoree dressed in everything from a hospital gown to a tuxedo. Others are more somber with collective prayers, Psalms or Holy book readings, anointing and last rites given by clergy.

As I mention in my column about a living tribute in the OC Register, “The gathering becomes a stage for people to share memories, sometimes songs, poems and lifetime achievement awards that express: thank you, I love you, I’ll remember you. And goodbye.

Some families suggest that attendees bring mementos, such as a picture or an item from a treasured family vacation, to help focus the reminiscing party. These celebrations help families prepare for the inevitable, and bond while focusing on life when they often feel helpless in the face of death.”

The funeral in living funeral tends to put people off because they feel like they’re digging the grave too early, but quite the contrary gathering to eulogize and celebrate one’s life before he or she dies is the antithesis. These pre-death ceremonial farewells have been coined living wake, celebration of life, friendship service, living tribute, reminiscing party and sendoff. No matter what these personalized rituals are called the most important element is that a special time is carved out for intimates to express love, gratitude and those things we should’ve, would’ve, or could’ve, said if we found the right time.

The first time, I read about a living funeral was in the book Tuesdays With Morrie: An Old Man, A Young Man, Life’s Greatest Lessons by Mitch Albom. Five million copies of this book were sold and it was

on the New York Times Best Seller List. Morrie Schwartz, dying of Lou Gehrig’s disease, goes to a funeral and realizes that his late friend didn’t get to hear all of the wonderful speeches so he decides to have a funeral before his death. He invited his family and friends to come to his home and say the things they would’ve said at his funeral. At Morrie’s living funeral in the Emmy winning made for TV movie produced by Oprah Winfrey, gospel singers perform giving the home ceremony a reverence that it so deserves.

As I trace the history of living funerals in my book, Parting Ways, I discovered Morrie awakened a ritual from our past because the act of gathering around the dying person to uplift them actually dates back centuries when dying was a social affair attended by the family and community. The dying person would give long-winded speeches about his or her wisdom gained in life and family members would gather to listen and express love and gratitude, but the ritual died in the twentieth-century when death moved out of the home and community and into the hospital. Now, with the prevalence of hospice, we’re seeing an awakening of this communal, familial ritual

because more people are taking their end of life journeys in the comforts of home, family and community rather than estranged in a sterile institution.

Sometimes, people don’t learn the most interesting attributes and experiences about a person until the funeral. So, the living funeral offers a time to really learn about the “whole life” of a person. Today, people lead such splintered lives spread far apart in many cases from their birthplace and their families. It takes a death to unite people from distant locals in one place. A living funeral maybe the last time a person joins with all those he or she loved and experienced life with and vice versa.

When I interviewed John Hogan, former president of the National Funeral Directors Association, for my book, Parting Ways, he recalled a man dying of cancer, who asked to have a living wake in the viewing room of his New York City funeral home. Friends and family came to the funeral home viewing room to collectively reminisce and the dying man sat on a throne like a king relishing every last moment shared with his beloved court, instead of laying dead in a casket.

So when might a person chose to indulge in such a ritual? Today, most people know when their time is short and the body is in irreparable decline. Many people deny it to themselves and those around them for self-preservation and protection of the family. The living funeral, also known as a celebration of life or living wake, is so instrumental in stimulating the family and friends to begin to talk about the possibility of the end. It’s not talking about death but rather life. I’ve come to the conclusion that a living funeral or living wake honors a person in a way that no milestone or birthday celebration is able to over the course of a life. In those culminating hours, family, friends and colleagues mark the sum of all those milestones and birthdays, a total life mission accomplished.

A terminal illness strips a person of his or her autonomy, individuality and social identity. Experts often call this a social death because a person maybe bound to a wheelchair or a bed. This consequence makes a person feel like a half-human. This is the hour when a person feeling quite vulnerable could find renewal in hearing about his or her life shared through the cherished lens of others rather than after he or she takes the last breath. The ritual binds the honoree, family and friends in reciprocity. Everyone is uplifted in a way they thought impossible at this stage of life, because attendees are given the microphone to say those words of remembrance and know the honoree is receiving it. That is so gratifying especially at an hour when we as humans feel completely out of control. They call the end of life awful. When people gather for collective reminiscence everyone is awe-inspired.  A good ritual shatters isolation and leads the way to transformation. In the end, it’s a remarkable gift to give as a parting gift to the honoree and an extraordinary memory to leave in the minds of survivors.