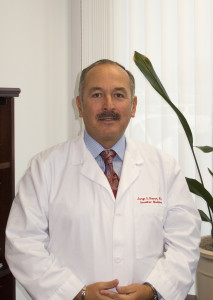 When Dr. Jorge Rivero was a young medical student in Lima, Peru, his grandfather, Felix, challenged his newly acquired patient care skills.  Felix refused to go to the hospital and obey doctor’s orders to treat his COPD. As a soon-to-be doctor, Jorge took charge of his grandfather’s urgent care at home.

Jorge began spending time at the bedside with his grandfather listening to his life review. Felix relived his days managing farms, crops and animal stock in the country north of Lima. Later in his life, Felix built a successful chili powder factory. Jorge unwittingly gave his grandfather the gift of knowing that his life would live on in his grandson’s memory.

By giving his respect and time to listen, Jorge earned his grandfather’s trust. The result—his grandfather listened to doctor’s orders and allowed Jorge to administer medications to improve his quality of life and keep him comfortable in the end.

“We didn’t learn about end of life care and hospice in medical school,” said Dr. Rivero, the Medical Director of Hospice Care of the West. His grandfather inspired his work today as geriatric physician and hospice doctor.

Though from as early as age 6, he knew that he wanted to be a doctor. He recalls playing doctor with his two sisters. He would treat their dolls and mark their faces with the measles. And he would concoct a make-believe Tilo, a medicinal plant, in milk, that the children would drink at the first sign of measles or mumps to push the fever and virus out of the body.

“I was always a dreamer since I was a boy,” Dr. Rivero said. “I dreamed of becoming a doctor.”

His mother, Maria, was so proud of his dreams, as she shared the same dream. As a young woman, she worked in a pharmacy with her uncle. Maria liked the chemistry of concocting the medicine and she wanted to go to medical school. But her uncle encouraged her to become a pharmacist, which did not interest her.

“My mother has a great memory and she was very curious,” he said. “She would have been a good doctor. Even today at 82, she has a good memory. She was always a good Mom. She gave us the space to make our own goals and she never imposed anything on us.”

Maria ended up becoming a homemaker after meeting his father, Jorge, an appliance salesman.

“My father was a hard worker and he was committed to his family,” Dr. Rivero reflected.

Yet, at six years old, his parents divorced. Jorge was the emotional pillar of support for his father in the aftermath of the divorce. Life changed. Jorge had to move from his childhood home and neighborhood, but he was relieved that he did not have to change schools.

He attended an American Congregational School founded by missionaries. This school was a part of Catholic parish that Jorge’s family was a member of in Lima. His classes were in both Spanish and English. By the time he graduated from fifth grade, Jorge could read, write and speak in English.

“I had a diverse education,” Dr. Rivero said. “I had a teacher from Ireland, Spain, the Philippines and many American and Peruvian teachers.”

He recalls in fifth grade being intrigued by the human body and skeleton. By high school, he loved to go to class and listen to his teachers.

“I never missed any school,” he said. “I enjoyed school for learning, not for the grades. I was B student until I started to look around at what medical school I wanted to go to. Then I realized I would be competing with the cream of the crop. I started getting A’s in my last year.”

He recalled his chemistry teacher would give lectures at the beginning of every class.  He drummed in Jorge the importance of working hard, making your dreams a reality and having passion for a career.

“My chemistry teacher had a big impact on me,” he said. “I still remember today some of the lessons he taught us.”

After graduating high school, Jorge attended an academy that trained him for the medical school entrance exam. The competition was fierce with 1,300 applicants vying for 106 spots at a renowned private medical school in Lima. He attended classes from April to December and then took the test. He came in 128, only 22 spots shy of being accepted to the school. Disappointed but even more driven, he returned to the academy to prepare for the following year’s entrance exam. In the academy, he met other students who had taken the test three and four times. So, he was cautiously confident as he entered the test for the second time.

The day the test results were posted he and his friend Francisco hopped a bus to the university. When he arrived there, he heard voices in the crowd as he exited the bus.

“He got in, grab him,” said the voices of some of the medical students. They tackled him and marched him to the window to see the list on campus. He was number 28 on the list.

Elated, he succumbed to what he knew would come next—a ritual of acceptance by the medical students of the university. Jorge was taken to the field where his hair was shaved off. As he looked down the field at the other new accepted students of his class, he saw Francisco having his hair shaved off.

After the ritual of acceptance, he called his mother on a pay phone to share the news. She burst into tears of joy. His father graciously paid for his tuition, which was quite a bit more than if he attended the public medical school in Lima.

“My father’s great legacy was his financial commitment to help me with medical school,” Jorge said.

In medical school, his friend Benjamin Robalino convinced Jorge to take the test to do his residency in America. To his surprise, he passed. After completing his internship practicing medicine in the Navy and later serving in public health medicine, he travelled to Los Angeles to prepare for the test to practice medicine in America. He felt welcome in Los Angeles among a large Latino community.

After six months, he travelled up on San Francisco to live with his sister and cousin. Within a year, he took the test and passed. The next step was to be matched with a residency program. He went out on a serendipitous blind date the day that he found out he did not receive a match for a residency program. He would have to spend another year in San Francisco without practicing medicine.

His cousin set up the blind double date with his future wife, Lourdes. She was not too fond of the blind date concept. It was not common in South America. She had immigrated to San Francisco from Honduras when she was 16 years old.

“Lourdes was hesitant, her body language showed it,” he said, chuckling at the memory. They met at a famous Brazilian Club. As the live music played, she eventually warmed to Jorge and they started dating. After a year, he was accepted to do his residency in family medicine in Cleveland, Ohio. He and Lourdes visited back and forth. Jorge struggled to adjust to a major culture shock and staying up all night on call at the hospital.

“The first year was brutal,” he recalled.

Lourdes left her banking position in the financial district of San Francisco to join him in Cleveland after a year. They had a small wedding in Cleveland in June 1987 and then they travelled to Peru to have a church wedding in the company of family and friends.

In 1989, they moved to Los Angeles where Dr. Rivero practiced geriatric medicine through a fellowship at USC. Not long after, they started their family in Mission Viejo because they fell in love with the neighborhood. Dr. Rivero’s greatest joy is being committed as a father to his children Eric, Gabriela and Andres.

“I am like my father—family oriented,” he said, proudly. “We have raised three children who are focused on their education but also very well-rounded.”

The spirit of his father and his grandfather live on in him today.

“I think I discovered how to interact with the elderly while taking care of my grandfather,” Dr. Rivero said. “He had a lot of geriatric issues, but he was such an interesting guy. I loved to hear his stories. And I love the social component as well as the clinical component of caring for my elderly patients.”

After USC, Dr. Rivero joined the faculty at University of California, Irvine where he cared for a large senior population that opened a window to understanding the inner workings of hospice. He noticed that when he referred patients to Hospice Care of the West and made the decision to be the attending doctor in the care of his patients, the nurses always collaborated with him on symptom management. He had not had that experience with other hospices. Through Hospice Care of the West, he began to see the benefits of hospice care improving the quality of life for his patients and their families at home. In 2006, he was asked to join as Medical Director of Hospice Care of the West. Not long after, he left UCI to go into private practice with Senior Health Care Associates.

“As an elderly care doctor, I have to be sensitive to picking up on the loss of function in my patients,” Dr. Rivero said. “And, I have learned to be comfortable with dying issues. I see hospice care as part of my approach when the goals to improve function change for my patients and they reach a point of no longer getting better. I provide continuity of care as they go on hospice. I’m not signing them out to anybody else. My commitment is there.”

Commitment and persistence are woven throughout Dr. Rivero’s life dedicated to making life better for seniors and their families. Looking back, he leaves this piece of wisdom for his children and the next generation.

“Pursue your dreams whatever it takes, obtain the tools and be persistent. Sometimes it takes longer than you’ve dreamed to achieve it, but I have tested it out and I am living proof that with persistence and the right tools you will make your dreams a reality.”