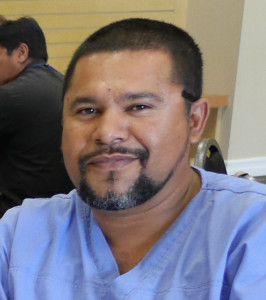 When he was just a boy, Edvin Tejeda, a home health aide at Hospice Care of the West, felt a higher calling to care for the whole person both body and spirit. He brings a presence of peace, calm and healing to the bedside of his patients.

He grew up in Quiragua, Guatemala, home to the ancient Mayan culture.  As a little boy, Edwin played in the shadow of these monuments that echoed the ideas, values and achievements of a past civilization. The tangible, yet invisible presence of these ancestors shaped his appreciation for history and wisdom handed down from one generation to the next.

In this lush tropical environment on the Motagua River, he swam and fished. Edwin was the youngest of the four children in his family. His grandparents raised him. Edvin’s father left before he had a chance to get to know him.  Though Edvin never met his own father, he felt an intrinsic connection to God, his father in heaven. At eight years old, his grandparents sent him to church where he discovered through the Bible and the teachings that God was never far away from him. His acceptance of Jesus into his life marked the most memorable of his childhood memories and thus became the inspiration for the man he would become.

At age 13 years old while fishing on the river, he injured his foot. His grandparents rushed him to the medical center in town. As he entered the hospital, Edwin felt instantly awed by the nurses and doctors caring for him and others around him. Edwin knew then, he would one day become a nurse. Not long after, he recalls fishing on the river when he saw a boy fall off a passing boat. He jumped in the river and saved the boy’s life. This would be the first of many.

When I asked Eddvin what his grandfather taught him, he chuckled and said very confidently, “Everything.” He recalls, many days of his youth fishing on the river with his grandfather and helping his grandmother raise chickens in the yard of their home, each activity a source of food for the family.  His grandmother guided him to respect all people, most especially the elderly. She encouraged him to study so that he would not have a life of hard labor.

He studied hard in school and did not succumb to any peer pressure of activities, smoking and drinking that could steer him from his dream of becoming a nurse. If you asked his grandmother back then how she would describe her grandson. She would say, “Edvin is a good boy.”

At 18 years old, Edvin became a nurse. He worked on the pediatric unit in the local hospital.

“It’s very exciting to care for babies just one to two hours after they are born,” he recalled. “It’s the beginning of life.”

One afternoon on the pediatric unit, all of Edwin’s fellow nurses on the floor had gone to lunch. He was the only one on the unit when he heard a father yell, “My son, my son!” Edwin ran over. The eight-month old baby stopped breathing. Edwin immediately administered CPR. He revived the baby. The life that swept out of the baby came back. The father filled with fear was overcome with relief and gratitude. Early in his nursing career, Edwin had become a guardian angel for his patients and their families. It takes a special kind of person to jump into action in a risky situation when everyone around you is in a panic.

Even with all the new beginnings in the hospital, he also encountered many lives coming to an end.  Edvin dealt with a lot of patients suffering from fatal diseases, accidents, and there were times when he would be there at the end with his patients and their families.

“Everyday, before I go to work, I asked God, “If there is somebody who wants to know God, let me feel it,” Edvin said. “I would sense when someone would talk about life and life after death. And I would say, don’t be afraid, Jesus died for you. And then, I would pray and sometimes, they would accept Jesus. And they would have peace at the end.”

While working in the hospital in Guatemala, he met his wife, Linda. She is a nurse too. They both wanted a better life. The city was not so safe back then. The streets were ravaged with crime.

In 2004, he made the leap. Edvin moved out to California where his mother lived. Not long after, Linda joined him. They married.  Soon, Edvin became a father to his baby boy, David.

We have Ana to thank for inspiring Edvin to join us here at Hospice Care of the West three years ago. She told him about hospice. After being raised by his grandparents and spending time as a nurse caring for patients and their families in Guatamla, he felt all the paths and experiences of his life melded together to serve hospice patients.

Edvin is often celebrated here at Celebration. I can recall, Shannon sharing the stories of how he always attends the Veteran pinning ceremonies that honor our veterans for their service in the U.S. Military. Edvin baths his patients and dresses them with honor so they are suited in dignity when pinned and saluted by the Color Guard.

Everyday, he prays for his patients before going to work. And at times, he shares Jesus with them to help easy their soul on the end of life journey.

Some of the folks on the hospice team shared these loving thoughts,

Caroline Chiou, RN, said, “Edvin has such a kind and loving heart. He goes above and beyond for all our patients to ensure they are comfortable. Thank you for your phenomenal care!”

And Jennifer Villegas, said, “He is always kind, responsible, and respectful. I truly appreciate working with Edvin.”

Today, his grandparents would be proud. The wisdom they passed on to him permeates his service to his patients and also to his hospice team.

In hospice, Edvin loves talking with his patients about life. He has learned a lot about many different cultures with different names for God.

When I asked him what wisdom would he like to pass on to his son David., I felt Edvin’s heart open. His voice quickened as if moved by the spirit and eager to pass on his wisdom.

“I never know what day will be my last and everyday when I leave my home, I pray that I return home,” Edvin said. “I want my son to know, I am your friend, I am your father, but the most important relationship you have is with God. And you must respect all people, especially older people. I’ve learned that though they follow a different God, we are the same. And we must respect all people and all cultures.

Take care of your body and your health. And study in school so you won’t have to do hard labor.”