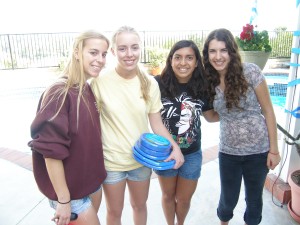 The Dream Catchers, a non-profit organization of high school volunteers for Hospice Care of the West, preparing to make a birthday dream come true for a hospice patient and her family. Lexi Crommett and her sister, Caitlin Crommett, founder of the Dream Catchers, Maryann Verges and Emily Beals decorate for the centennial.

Caitlin Crommett, 17, and her team from the Dream Catchers, arrived with home cooked Cuban food and decorations to celebrate the life of Fortunata Mirabel, the matriarch of a large Cuban family, at her home in Mission Viejo, California.

The afternoon sunlight sparkled on the surface of the pool in the backyard and Cuban music filled the air as the girls wove streamers and balloons around the patio. The Dream Catchers are a group of high school volunteers for Hospice Care of the West, a local Orange County hospice.  Caitlin founded the non-profit organization two years ago to make last wishes and lifelong dreams for hospice patients and their families come true. She’s become a local expert at creating the kind of stages memorable last moments are made on from a last sail on a yacht on the Pacific to a last gourmet supper in bed to a final fantasy filled day at Disneyland.

Caitlin and older sister, Lexi, Emily Beals, 16, and Maryann Verges, 17, spent the morning cooking up an array of authentic Cuban dishes from recipes they found on the Internet. They’d been planning the celebration for more than four weeks from the music and food to the decorations in an effort to create the perfect setting for this family reunion.

In the house, Fortunata’s daughter-in-law, Fela Mirabel, prepared her for the festivities. She trimmed,

brushed and curled Fortunata’s hair, dusted her nose with powder and moistened her lips with lipstick. 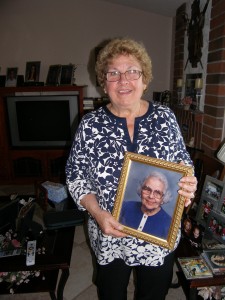 Araceli Alvarez, 72, had a dream to celebrate her mother's 100th birthday with a Cuban-style family reunion. Her mother, Fortunata Mirabel, is in Hospice Care of the West, a local Orange County hospice.

About a month before Fortunata’s 100th birthday, Gina Mendoza, her nurse from Hospice Care of the West, told the family about the Dream Catchers.

“You don’t often see a family taking care of patients who require this much care at home,” Mendoza said. “So, when I realized she was going to live to be 100, I thought the Dream Catchers could help them plan something special.”

Fortunata’s daughter, Araceli Alverez, 72, dreamed of bringing together the whole family, neighbors and friends together for one last birthday party. Fortunata suffers from dementia, so the centennial was more for the family.

“We wanted everyone to gather for a happy moment to celebrate our mother rather than for the funeral that would be a sad moment,” Araceli said.

More of these celebrations of life are occurring in the final stages of life. People aren’t waiting until the funeral for the family to gather around the person at the end of his or her life, instead they’re flying in from across the country to express heartfelt affections, pay tribute and gratitude before the death.

Hospice Care of the West embraces a philosophy to celebrate life because these gatherings bring about a time for familial and communal bonding that is so needed when one enters hospice, a service of care in the home for someone with a prognosis of six months or less to live. 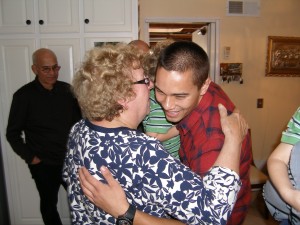 Araceli Alvarez greets all more than 30 friends and family arriving from near and far for her mother's 100 birthday celebration made possible by the Dream Catchers.

The presence and or announcement of end of life can often make a tear in the social fabric of a family and community, these celebrations are like anticipatory stitches to bring a family together when they feel like their being wrenched apart. Most people immediately think that you go into hospice to die, but as Fortunata, her family and the Dream Catchers help us to see that it’s not just to die, but instead to make a plan of how you wish and dream of spending the limited time you have left in the company of family and friends.

As Fortunata made her entrance into the crowded kitchen of arriving reunions, her two children, six grandchildren, 11 great-grandchildren and two great-great grandchildren along with friends from near and far bathed her and each other in hugs and kisses as the Cuban music played.

“We’re so happy, some of these people we haven’t seen a in a long time,” said Norma Diaz, 73, Fortunata’s eldest daughter.

Fela gave her mother-in-law once last primp and then clipped a corsage of fresh flowers on Fortunata’s lapel.

“I want her to look wonderful for her birthday,” Fela said. “She was an excellent mother-in-law, happy all the time and always good with the kids.” 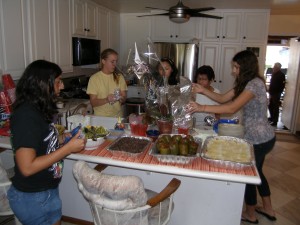 The Dream Catchers cooked an array of traditional Cuban fare with Internet recipes.

Caitlin threaded through the crowd with other members of the Dream Team. She held a hand-made dream catcher above Fortunata sitting in a wheelchair. A dream catcher looks like a small net threaded with feathers and beads. The Dream Catchers make them at school.

“This is a dream catcher, she said. “If you hang this above your bed, it will catch the good dreams and get rid of the bad.”

Caitlin and the Dream Catchers set up the buffet of traditional Cuban fare—arroz con pollo (chicken and rice), frijoles

(black beans), stuffed bell peppers and an avocado salad. The aromas of the authentic food evoked the days when Fortunata and her daughters would cook together for the family. 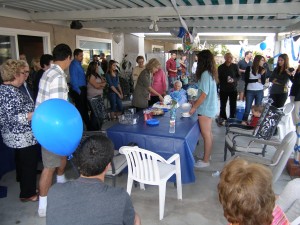 Fortunata’s muscular grandsons lifted her wheelchair out of the family room and onto the patio in the warm shade. She basked in the sunshine and chatter of everyone dining at the tables around her.

“We just want to keep her forever,” Fela said as she looked on at the backyard buzzing around Fortunata.

Caitlin and her team said good-bye so the family could enjoy their party. She gave Araceli a hug.

“You did a wonderful job,” Araceli said to Caitlin. “Please say ‘thank you’ to your friends.”

Shortly after, family sang Happy 100th Birthday to their matriarch. Araceli beamed as she looked on.

“I’m going to send the pictures to my family in Cuba,” Araceli said. “I want to tell them about how these young people do such good things for old people. They should teach our children.”