Pat White’s “tell all” life review interview hit top story at the OC Register with more than 30,000 hits and Yahoo News. The reader response inspired  me to write a part II in the OC Register. Read the column below.

Elizabeth Carroll, 37, arrived at her dying grandmother’s room with the newspaper article revealing the family’s secret connection to notorious bootlegging gangs during Prohibition.

“Nana, did you read this yet?” Elizabeth asked.

“Yes,” Pat White beamed. “Well, I thought about it and I wasn’t going to talk, but then I thought “What are they going to do? Kill me?'” This attitude, Pat was proud to say was her mother’s spirit living on in her.

At 89, “Nana” was dying in a board and care in Mission Viejo. She tried to stay positive and overcome the question “Why is God not taking me?” that reverberated in her mind.

“There must be a reason I’m still here,” she thought. 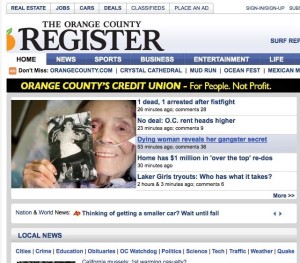 Pat had kept her family secrets for decades and almost took them to her grave. But Donna Miller, director of volunteer services at Hospice Care of the West, arrived with a video camera to record an interview that let Pat retrace her childhood. She recounted growing up with a bombshell 1920s flapper as a mother and some of America’s most infamous gangsters as her stepfathers.

I participated in that interview and wrote a column. As she looked over the newspaper story with a picture of her and her mother in matching fur coats, Pat said, “OK, I’m done,” with a sigh of relief.

Elizabeth saw an instant peace and release in Pat that day. One week after the article was published, Pat died.

I had a chance to sit down and talk with Elizabeth after Pat’s death to get her side of the story, as many readers asked what her grandchildren thought about these family secrets being published in the Register.

“It’s a huge accomplishment for her,” Elizabeth said. “At the end of her life, literally on her deathbed, you took her from a frail, weak woman to the top of the world. And she could finally let go.” 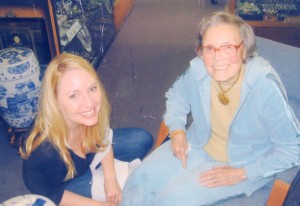 Elizabeth Carroll, 37, and her grandmother, Pat White, on their usual Saturday afternoon shopping in San Clemente. After Elizabeth’s grandfather and mother died, Pat use to say “It’s just you and me, kid.” Photo Courtesy of Elizabeth Carroll

Because of my experience interviewing my mother as she was dying and following Donna video-recording many life reviews, I’ve seen that recording those stories improves the end-of-life experience for the terminally ill and their families.

give to family members.

Researchers have also conducted studies with grieving families and reported in the Journal of Palliative Medicine that nearly 80 percent of the families said therapy enhanced their loved one’s dignity and the spoken legacy brought comfort to the living.

Elizabeth understood this implicitly. One of her biggest regrets after her mother died was that she didn’t have any recordings of her voice. So, she began saving all of her voice messages from her grandmother. She has nearly 16, which means her voicemail is almost always full. Since her mother and grandfather died, Elizabeth and her grandmother have become very close. 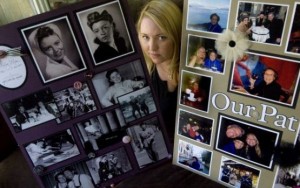 Elizabeth Carroll of Laguna Beach is framed by images of her grandma’s life. Images of Carroll, her husband and grandma on their world travels are included, bottom right. The posters were featured at White’s memorial reception. CINDY YAMANAKA, THE ORANGE COUNTY REGISTER

At the celebration of Pat’s life at the Ole Hanson Beach Club in San Clemente, Elizabeth and I reflected on how Pat had turned a childhood plagued with gangsters into a life free of any trace of this past.

“(Pat) was born into a life that she didn’t choose, yet she didn’t let it define her,” Elizabeth said. “She never drank, swore, smoked or did drugs. She went to school as a young woman and learned a trade in photography and rose in a man’s world working at Douglas Aircraft.”

Although her grandmother is gone, her legacy continues, and artifacts of her secret life intrigue Elizabeth. She knows the stories behind most of Pat’s jewel heirlooms. But not the more obscure items: The ballpoint pen that shoots nine rounds of bullets or the pen that releases tear gas; the 33-revolver that she slept with beneath her pillow; the velvet lined violin case that concealed a liquor bottle during Prohibition.

Some of the answers are in the life review video Pat left behind.

Hospice volunteer Bob Rank edited the interview into a documentary with pictures and music. When Elizabeth watched the video on the eve of Pat’s 90th birthday, tears of joy flooded her face.

“I was mesmerized even though I know her better than anyone. It was almost like watching a documentary on the History Channel of someone I didn’t know,” she said. “My husband and I just held hands and were crying. We didn’t want it to end. What a gift.”

At the end of Pat’s life celebration, Elizabeth gave copies of the newspaper column to her five other grandchildren and promised copies of the life review video would follow. Then she asked everyone to raise a glass and gave the toast Pat used:

“When nights are long and moons are full and you are lonely too, if you but mention once my name, I’ll know and know you knew. And take a picture of a cloud, the kind we used to see and when you drink that same old drink, turn down a glass for me.”

Tell me a little about your life history, particularly the parts that you either remember most or think are the most important? When did you feel most alive?

What are the most important roles you have had in life (eg, family roles, vocational roles, community-service roles)? Why were they so important to you and what do you think you accomplished in those roles?

What are your most important accomplishments, and what do you feel most proud of?

What are your hopes and dreams for your loved ones?

What have you learned about life that you would want to pass along to others? What advice or words of guidance would you wish to pass along to your son, daughter, husband, wife, parents, or other(s)?

Are there words or perhaps even instructions that you would like to offer your family to help prepare them for the future?

In creating this permanent record, are there other things that you would like included?