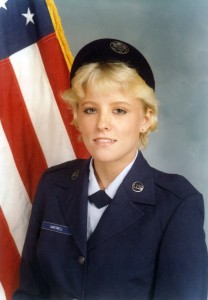 Heidi Gonzalez is a veteran who now serves veterans and their families at Hospice Care of the West. Courtesy of Heidi Gonzalez

Heidi Gonzalez, a military veteran, joined the frontlines of hospice care for the same reason she enlisted in the armed forces to protect the liberties and quality of life we value as Americans. As a hospice consultant for Hospice Care of the West, she witnesses the transformative power of hospice care in the lives of her patients and families.  It was the waning last days of her father’s life when she felt this call to duty.

He was always the strong one making the decisions for his military family when moving to Saudi Arabia, Iran and other places of conflict around the world. She recalls living in Iran when the revolution led by Ayatollah Khomeini started. At her father’s command, they stayed in their home just outside the capital during the early days and witnessed the country collapse. People had no running water and the basics we’ve come to expect in America. She no longer could attend junior high school there. In fact, she remembers signs that read, “Americans get out.”  She and her brother were the only blond ones in their neighborhood. They stuck it out for months weighing out the risks of staying versus leaving, until her father signaled it was time to go. They left everything behind to return to America.

Though a master at navigating in hostile foreign territory, in the end, her father yearned for the familiar. He still knew when the time had come to raise the white flag and call in a different kind of veterans, the expert hospice team, to guide the final leg of his journey. His wish was to live at home surrounded by his family in New Hampshire. Hospice alleviated his pain, made him comfortable at home and helped the family to understand the final hour was near. That’s when Heidi flew in after receiving his call.

Heidi sat at his bedside and held her father’s strong hands. The hands she once reached up for as a child in need of protection on an unfamiliar crowded street. Time had flown since then. She was now 40 years old. He had waited all of those years for his only daughter to give him a grandchild, but his wish had never become a reality until his last hour.

“Dad,” she said rubbing his hand. “I’m pregnant, I’m going to have

Even in his weaken condition, he beamed proudly and she witnessed joy fill her father.

Later she realized upon reflection that her family could experience unexpected joy and celebrate life with help hospice even in the shadow of death. Often families don’t get this time because they wait too long to bring on hospice and accept that it’s time to say good-bye. Heidi understood from a personal experience that introducing hospice early helped focus the family on realizing the limitations of medicine and accepting the time had come to raise the white flag. If he would’ve kept fighting, he might have died unexpectedly and not shared that last moment with his daughter learning about the birth of his grandson.

She has always looked up to her father to give her direction in life. He exposed her at a young age to the conditions outside of America that helped her understand why she should serve her country. When she was old enough to make the decision for herself, she joined the armed forces. She served during the Cold War in classified communications in Texas and then in Germany. After her service and living overseas in the military, she returned to civilian life in search of her second calling. Soon after her father’s passing, she knew the combination of her military background and personal experiences could help veterans. The experience at her father’s bedside fortifies her passion about educating families and her community early about the benefits of hospice care.

She is dedicated to veterans and their families as a consultant for Hospice Care of the West. She has learned that education is the best way to combat their fears. The unknown is territory where fears abound. In a way, she creates a roadmap for them into this unknown, so that they have a

clear path and understanding of how hospice care can bring comfort and peace to their end of life journey. She is also equipped with an artillery of resources to specially assist veterans such as enrolling them in financial aid for in-home care. She also organizes a plan of care tailored to their specific needs based on wartime experiences. Heidi also can arrange to obtain lost medals and dog tags.

If the veterans wish, she can arrange a life review video to record their wartime experiences and their life wisdom to pass on to the next generations. Toward the end, she can assist families in organizing funeral rites to honor the veterans. As for those memorable moments she experienced with her father in hospice, Heidi equips families with the resources to make the the right decisions and arrangements that lead to a peaceful setting in the home for veterans to celebrate their lives and military service.