Mary Buchard is a Hospice Care of the West patient who graced us with her amazing life review video and her service to our country as a female pilot in World War II.

Shortly after the attack on Pearl Harbor young men lined up at enlistment offices all across America to serve their country in World War II. Some two years later,  Dr. Mary Burchard, peered out of her medical practice window in Pennsylvania. She was an airplane pilot hobbyist and yearned to fly fulltime. Below, the main street bustled with new enlistees marching off to war. She left her practice that afternoon and told her Daddy, “I want to join the military.”

Dr. Mary was already breaking barriers as the only woman doctor in town. Her brother for some reason couldn’t serve and she wanted to represent her family in serving their country. Mary exemplifies the Greatest Generation, yet her military story is uniquely told through the lens of a woman. Mary valued her parents, church and her country. She felt the call to serve just like the young GIs.

When her father finally gave his blessing, she left behind a busy medical practice and marched down to city hall with her flight log in hand. The enlistment officer said to her, “We’ve been looking for someone like you.”

Today, some seven decades later during a video recorded life review interview on the patio of her home in Laguna Hills, Mary looks up at the sky. She relishes the roar of an airplane flying by. 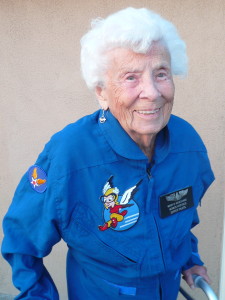 Mary Burchard is a member of the Women Airforce Service Pilots (WASP) and received the Congressional Medal of Honor for her service during World War II.

“I hear an airplane,” she says coming out of her reverie. “Lucky devil.”

Mary recalls the first time she took flight in York, Pennsylvania. Her boyfriend was a flight

instructor. Finally, after many days of watching other people go up in the air for flight lessons. Mary turned to her boyfriend and said, “How much to go up?”

“Nothing, for you,” he said. She climbed into the cockpit of the airplane. Once above the clouds, he asked Mary if she was ready to take over. With ease, she flew the plane.

“You’re a born pilot,” he said. Not much later, Mary bought and flew a plane of her own.

At age 95 years old, in the company of her proud daughters, Susan

Mullins and Eileen McDargh, she recalls piloting military aircraft in the skies over America during World War II. Donna Miller, the Director of Volunteer Services at Hospice Care of the West, leads the interview with questions from behind the video camera. 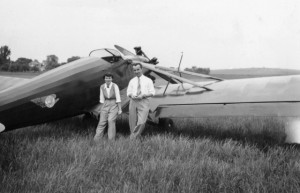 Mary Burchard with her boyfriend, Will, in her early pilot days. Courtesy Susan Mullins

A volunteer video editor will then mix the video with music and a montage of pictures cheap viagra from the family archives, so that Mary’s remarkable history will be preserved. Though in her final season of life and physically feeble, she exudes courage, faith and strength that will no doubt inspire generations to come as she recounts very rare military experiences.

In 1942 there were so few pilots to serve in combat that the military was in search of women to fly military aircraft stateside. About 25,000 women volunteered to join Women Airforce Service Pilots, about 1,800 were accepted and trained. At the end of rigorous training to “Fly the Army Way” on the Avenger Field in Sweet Water Texas, 1,078 women pilots graduated and join the armed forces. Mary and her graduating class became historical figures, inspirational women role models.

After her service ended, she joined the Red Cross to open social canteens for soldiers awaiting their orders to return home. She would dance the night away at the officers club. She recalled playing piano in the recreation hall overseas. She even sang songs during the interview from that era. At the end of the war, she rode home on a troops ship where she met her husband Jack McDargh.

With Donna’s questions, Mary reflects on becoming a mother after the war. She and her daughters sing songs together just as they would growing up. Their reminiscing turns to family vacations and their last trip to Ireland. 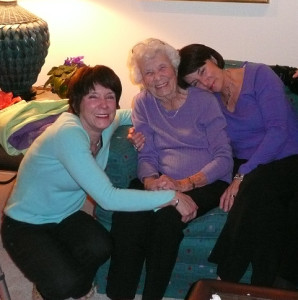 Mary’s daughters lean in to get closer to their Mom and then they hug.

“You are the best Mom in the world,” Susan says. Eileen echoes the sentiment.

“You know I love you more than you know,” Mary says embracing her daughters. For a moment, the veteran pilot softens to bask in the warmth of their affection.

As the interview closes, Donna asks,

“What do you want your family to remember about you?”

Mary smiles as she looks at her daughters.

“I was very daring!”