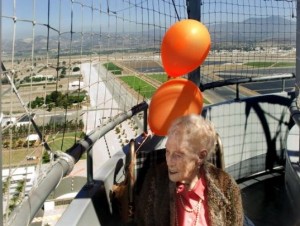 Bessie Anderson, 105, of Laguna Niguel is flying high as she fulfills her dream of soaring in the Great Park Balloon. CINDY YAMANAKA, THE ORANGE COUNTY REGISTER

Shortly after her 105th birthday, hospice patient Bessie Anderson prepares to go up for a balloon ride at the Great Park in Irvine. The big orange helium balloon is nearly 74 feet in diameter. On the flight deck, Bessie is tucked into a wheelchair pushed by her granddaughter, Sheryl Villapania, 48, of Murrietta, who uses a wipe board to communicate to her. Though Bessie’s hearing is diminished, she works around this and continues to engage in conversation.

Bessie Anderson, 105, of Laguna Niguel is flying high as she fulfills her dream of soaring in the Great Park Balloon. The Irvine attraction flies 400 ft. high with a 360-degree view spanning up to 40 miles. Dream Catchers, made up of high school volunteers, grant last wishes for hospice patients. Anderson was thrilled with the views on this clear day and was grateful to everyone who made her dream come true.

“Are you scared?” Sheryl writes on the board.

Bessie reads the board then beams and says, “No, I’m excited.” 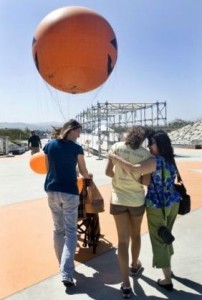 Bessie, of Laguna Nigel, is dressed up for her adventure flight. Her white hair is curled, blush enhances her cheekbones and a pearl necklace punctuates her coral silk blouse. Since the Great Park started free balloon rides in 2007, she has wanted to go up but never quite made it.

When her nurse, Nancy Nicolosi, 52, from Hospice Care of the West, talked of her recent flight, Bessie sat up in bed.

“I want to go for a balloon ride at the Great Park,” she said.

Nancy called on Dream Catchers, a group of high school volunteers who make last wishes come true for hospice patients. Emily Beals, 16, the new president of the organization, answered the call. She is a junior at Tesoro High School and recently took over from the founder of Dream Catchers, Caitlin Crommett, 17, who went off to college and started a chapter at Notre Dame in Indiana.

Since the organization began two years ago, Dream Catchers has granted 22 dying wishes.

Caitlin’s inspiration for making dreams happen for hospice patients came from volunteering since seventh grade for Hospice Care of the West and a scene from the movie “Patch Adams.”  In the movie, the doctor is focused on not just treating the disease but caring for the patients. The spark for Dream Catchers came when the doctor inspires a depressed old woman to eat again by making her dream — of plunging into a pool of spaghetti — a reality.

The Dream Catchers have taken hospice patients for one last sail on the Pacific, a walk with their family down Main Street at Disneyland and out for a special reunion dinner with family and friends, just to name a few. One of their goals is to reunite families for a shared moment when time is running out.

The balloon ride is the 23rd dream and Emily’s first as president of Dream Catchers. She reserved the balloon for Bessie with park operators.

As she arrives at the balloon flight deck, Emily tries to mask her jitters. Though there are four generations between them, Emily is more afraid of riding in the balloon than Bessie is.

“I would never do this on my own. I’m only doing this for Bessie,” she says. “My life is on the line here.”

Emily nervously strolls alongside Bessie, Sheryl and Nancy. The balloon operators strap Bessie in and electronically lift her onto the gondola. Bessie smiles with glee. Sheryl wheels her grandmother along the gondola edge as they choose a good lookout point. Emily holds on to Nancy, the nurse, as they step into the gondola.

The gate locks them in and they are ready for take off.

Up and up and up, the balloon takes flight, and Bessie says, “It’s so smooth and so quiet.”

She recalls how loud a ride on the Goodyear blimp was in the 1920s and then reflects on that time when people would step out of their houses to watch the blimp fly by. 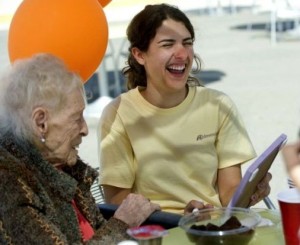 The balloon reaches its zenith and floats. Emily’s

knuckles turn white as she grips the side of the gondola and looks out at the horizon, not daring to look down. The wind blows through Bessie’s hair and tickles her cheeks. She looks down at Orange County below without any sign of fear; she remembers that it was all orange groves when she was growing up.

The balloon operator says we are 40 stories high, about 400 feet up with a 360-degree view. When the balloon starts its descent, Emily looks relived. Upon landing, Bessie is glowing.

“Ahhhhh, that was a thrill! You know everybody doesn’t get to do that.”

“I love to see her happy like that.” Sheryl says her father, Bessie’s son, just died in April. At the time, Bessie had pneumonia and suffered a heart attack that sent her into hospice care, which is available to those with six months or less to live.

“She still enjoys herself, every little piece of life,” Sheryl says.

After the flight, Caitlin’s Mom, Colleen Crommett, spreads a buffet of sandwiches on tables near the flight deck. As Bessie enjoys the lunch, her granddaughter, Sheryl explains on the wipe board how Emily organized this balloon ride. Bessie is amazed and beckons Emily to her side.

“Thank you so much,” she says with glistening eyes. “It was very sweet of you, dear.”

“You’re welcome Bessie,” Emily writes on the board.

was a lot of work,” Bessie says to Emily. “If somebody told me I would get to do something like this at my age, I would never have believed them. So, I did. Everybody doesn’t get to ride in the big balloon.”