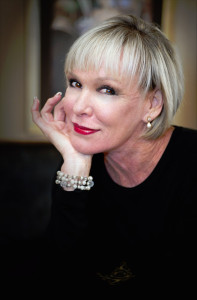 Nancy Johnson, Hairstylist Volunteer for Hospice Care of the West

Nancy Johnson received a call that Katherine, a 93-year-old hospice patient, needed a haircut and style. It would probably be her last. Nancy is a volunteer hairstylist for Hospice Care of the West in Orange County. She is on call to give haircuts and makeovers for any patients wishing to feel and look good.

Katherine requested Nancy come right away. Upon arriving at Katherine’s Laguna Beach home, Les, her son answered the door. Nancy entered to see a frail woman connected to an oxygen tank. Her hair was already washed and ready for a cut. So, they walked into the kitchen, and Katherine gave specific directions on how she wanted her hair cut and styled.

“I want it short in the back, longer on top,” Katherine said.

After Nancy spun her magic, she gave a mirror to Katherine.

“When was the last time you had your hair cut?”

“This is not about me it’s about her,” Les said. But he couldn’t remember the last time as he had been so wrapped up with caring for his mother. An hour later, Les sported a new haircut too. He was filled with gratitude that Nancy had taken the time to care for both of them.

Katherine passed away the next day.

“She looked good for Jesus,” Nancy said. “I think in my heart of hearts, she knew. I hope Jesus likes my work.”

When Nancy was just 25 years old, her mother was dying from esophageal cancer.  She gave her mother a last haircut and perm at home just three days before she passed away.

“It was a bittersweet,” Nancy says recalling combing and styling her mother’s hair for the last time. “I knew this was it, but it made her happy and in that moment I was happy too.”

She was introduced to Hospice Care of the West in 2010 when her husband, Paul Johnson, the longtime NBC4 Today in LA morning traffic reporter, went into hospice. He was diagnosed with a glioblastoma, the deadliest form of brain cancer. Paul made the decision not to have any treatment radiation or chemotherapy.

“I don’t want to be sick while I’m sick,” Paul said to Nancy. “I want to live the bucket list while

So, they rode a B-29 bomber, saw a live performance of South Pacific and every weekend they celebrated his life with friends coming in from near and far for backyard barbecues.

“He had an amazing quality of life,” Nancy said. “If there is such a thing as a beautiful death, he had one. He died at home in my arms and he was not in pain. Deb Robson, of Hospice Care of the West, was with me, every step of the way. Sometimes she would come at midnight if I needed her. “

So, Nancy wanted to find a way to give back. She married her love for cutting hair with volunteering for the hospice.

She and Paul knew that she would probably be widowed as he was 22 years her senior. She recalled his first heart attack in 2006 that magnified this reality. At the time Nancy had retired for four years from cutting hair to spend time golfing and traveling with Paul. But after the heart attack, she wanted to go back to work. Within months of starting work at a shop in Newport Beach, the owners wanted to sell.

“He bought the shop for me, so I would have something to do after he died,” she said.

Whether at her shop, Shear Attitude in Newport Beach, or in the home of a hospice patient, Nancy wakes up every morning excited about who is going to be in her chair that day.

At just five years old, Nancy felt the first spark of passion to become a hairstylist when cutting her sister’s hair. The scissors meant for paper didn’t cut her hair perfect but the feeling of transforming her sister’s appearance resonated.  She equally recalls her mother’s displeasure with her sister’s new hairdo.

Her mother took the scissors away. But not for long, by 16 years old, Nancy knew cutting hair would be her life profession, though her mother wasn’t pleased.

“She wanted me to be a nurse,” Nancy says recalling her mother’s wish.

By high school, she was the go-to girl for hair and make-up for all of her friends. And she joined cosmetology school after graduation. She’s been behind the chair cutting hair since 1979.

“I don’t regret a day of it because I do what I love,” Nancy says. “I’ve always been a hairdresser. Things you enjoy as a child that you pursue as adult will probably make you very happy and very successful and that’s where I am at.”

Though Nancy didn’t become a nurse, her hospice volunteer service caring for hospice patients must make her mother proud.