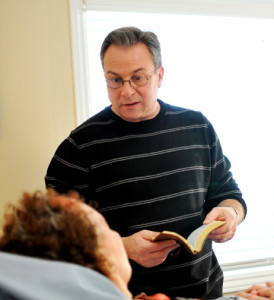 Each time, Dave Boyle, a hospice spiritual care coordinator, sits down at the bedside, he embarks on a journey with his patients that begins with a simple disarming question—

And just like that he cracks open the mental book of her life and his patient reflects on the chapters both spiritual and not so spiritual that define who she was and who she is today. You wouldn’t know it by looking at this laid back, humble guy, but Dave has taken this journey hundreds, if not more than a thousand times since he started with Hospice Care of the West in 2004.

He gently guides his patients’ life reflections full circle to the here now.

Surprisingly, more often than not, his patients respond “yes.” As the question is not are you ready to meet God? Or have you atoned for your sins? He is a caregiver of the soul, not a priest.

He will then ask, “Would you like me to pray for you?

Rarely, do his hospice patients ask for health prayers. Most of them would like to pray for their children or an estranged loved one.

As he wraps up his first visit, he always asks,

“Is there anybody you need to forgive?

Or, is there anybody that may need to forgive you?

That’s when the tears come, which is why he always makes sure to ask this question on the first visit, because he never knows if it will be his last. Dave recalls one such afternoon when a woman in her 90s cried and talked of her estranged daughter in Florida. Upon contacting her daughter, he learned of a mother who lived a tough life abandoning her daughter on multiple occasions to run off with multiple men. Yet, he found a way through the pain and sadness to reconnect them before she died. His faith often pads the journey into the unknown for many.

End of life can often be a dark time for families as past grievances come to the fore. Dave brings light to these dark hours sometimes through prayer and other times through scripture. Sometimes he hears from his patients and their families we haven’t been to church in years.

He meets his patients right where they are and provides them with spiritual support they need. Sometimes, this means reconnecting the patient and family with a local mosque or temple.

Many of his patients are World War II veterans who remind him of his father. They don’t open up very easily when it comes to talking about the war and combat. Yet, he often finds a way to connect with them. He attributes his gift with people to his mother who could relate to anybody.

His nonjudgmental, disarming demeanor is born out of a darker time in his life when he battled addictions to drugs and alcohol. Though Dave was born in a small Midwest suburb called Oak Park in Illinois in 1957 and grew up as the youngest of four children playing baseball and attending church twice on Sunday, by age 16, he rebelled against the life that was cut out for him.

Still, he attended Biola University, a Christian college, in California and studied psychology. He went on to work in in-patient hospital for psychiatrically challenged youth. He realized very early on that the youth often carried the pains of their parents. Many parents unwittingly passed on their troubles and neurosis to the children. He and his team came to realize that healing the child meant giving both the child and parents new tools and systems for reacting and interacting within the family at home. As he guided the young off from the edge of despair, he still found himself in troubled circumstances.

His additions haunted every aspect of his life and

by the time he reached his 30s, he pulled away the veil of denial and admitted to himself he had a problem after his first marriage failed. He could not have a healthy relationship because his addiction robbed him of any connection. Dave entered Celebrate Recovery, a Christian program to break his addiction. In 1993, he was born again when he became a follower of Jesus. He marks his life with a clear delineation between that time and now. Today, he has lived nearly two decades, 20 years, free of his addiction.

His connection with God was a religion, his parents’ religion, growing up, but after he was born again, he has a relationship with Jesus. In the Bible, God says he works all things together for good for those who are called to his purpose. In Dave’s life that proved true, as he became an in-take representative for New Life Ministries, a Christian organization for addicts and folks in need of recovery.

“The biggest obstacle in addiction is denial,” Dave said. So, any time someone called in for help, the person always asked what New Life Ministries offered.

addicts will find 100 reasons not to go into recovery,” he said. “So, I always asked them to tell me a little bit about themselves first.”

Most of the time in his conversation, the person on the other end of line, would say,

“Have you been here before,” Dave would say at times “yes” if appropriate. But ultimately, he knew all the stops other addicts would pull, and he had a solution for each one. Once they ran out of excuses, they went into recovery sometimes just meetings, other times in-patient recovery for 30 days. Often he would get calls from the wives of addicts and he would ask,

“Does your husband know your calling, is he ready for recovery?”

Some, well most, would say no. He would then say, what we need to do first is empower you as you have been broken down as result of living with an addict. You will not be able to help him with an intervention until you become strong yourself.

His most rewarding calls came when two or three years later, he would hear from his patients, “Hey Dave, just want to let you know I’m celebrating two years sober today. And I couldn’t have done it without you.”

After 10 years of shepherding addicts to recovery, Dave found an ad in his church directory for a chaplain. At the time Hospice Care of the West was a start-up company. He thought that patients in hospice would look at him and say,

“How are you going to help me now, I’m in this spot,” he said thinking back to his first days as chaplain. “But I’m humbled by the attitude of gratitude that I receive from my patients. They are grateful I’m there and reaching out even at the end of their lives. That has been transformative for me to realize no matter where you are in life you can reach out.”

Dave strikes me as one of those humble guys, like George Bailey, played by Jimmy Stewart on “It’s a Wonderful Life.” He has empowered and guided lost troubled souls in their youth, in midlife and now at the end of life. He is evangelist for living a good life at all stages. His mission work has gone full circle through the human lifecycles.

I think the world is truly a better place because you’re here, Dave. Thank you for sharing your story with me and everyone here. You are an inspiration.