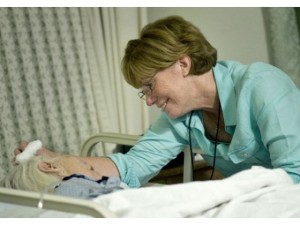 A vigil to mark the last night of Iola Van Ornum’s life began when Bev Stevens entered her room at Fountain Care Center shortly after sundown.

“I’m Bev, the vigil volunteer,” said Bev, 57, a member of a corps of volunteers who keep watch and accompany those in their final hours of life.

“Well, you must be a very special person,” said Iola’s daughter, Sara Gustavson, 66, of Tustin.

Bev is a part of a new volunteer program at Hospice Care of the West to sit vigil with the dying. Sara received word earlier in the day that her mother, who has Alzheimer’s disease was “actively dying” or “making her transition.” The body begins to show signs of shutting down: Bladder function ends, skin color changes and often the person will have hallucinations, body temperature fluctuations and finally fall into a coma-like sleep.

That’s where Iola was — eyes at half-mast, mouth open to breathe in this coma-like state, lying in a hospital bed. Sara introduced her mother as an artist and a woman who would never follow a recipe. “Iola, was born during the great storm during 1916 in Orange County, and the doctor took a row boat to deliver her at home in Garden Grove.”

Closing her eyes on nearly 95 years of life would take Iola some time. Just as a woman labors a baby into life, a person also labors out of life. Those who help are called doulas, the Greek word for servant.

Being a doula is a calling for Bev because in 2006, she was summoned to the facility where her mother was dying of Alzheimer’s disease in Pennsylvania. She couldn’t get back in time to be with her mom, who died alone. So, now, as a retired schoolteacher, Bev volunteers her time for families who need her help.

Before Sara left for home around 8:30 p.m., she pointed out Iola’s Bible on the bed for Bev to read to her Mom and then left her phone number.

Bev went to work creating a calming cocoon for Iola, with as much care as a mother would swaddle her newborn. She pulled a chair close to the bedside, played soft Celtic music and turned down the florescent lights to warm the clinical, cold atmosphere. She rubbed Iola’s forehead and noticed there was no furrow between her brows, often a sign of pain or distress. Then she gently massaged lotion into Iola’s hands.

After the half-hour massage, she read from “The Best Loved Poems of Jacqueline Kennedy Onassis,” because memorizing poetry was common for Iola’s generation.

She held her hand or massaged her forehead, keeping a constant connection, to let Iola know she was not alone. Bev read “Pilgrimage” by Sir Walter Raleigh: “Whilst my soul, like quiet palmer, Travelleth towards the land of heaven; ?Over the silver mountains, ?Where spring the nectar fountains; ?There will I kiss;?The bowl of bliss…” 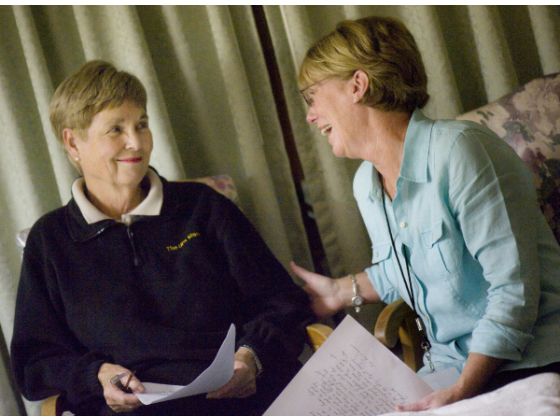 Sara Gustavson of Irvine, left, is asked about what her mom is like by Hospice Care of the West volunteer Bev Stevens. They talk near Gustavson mother’s bedside where Iola Van Ornum, 94, transitions towards death at Fountain Care Center in Orange. CINDY YAMANAKA, THE ORANGE COUNTY REGISTER

Bev turned down the lights, flipped on her book light, and turned on classical music. She told Iola softly that she would read the verses that Iola had marked and underlined in her Bible. For more than hour, she read verses that held meaning for Iola.

Bev noticed Iola’s temperature rising and put a cold washcloth over her forehead. Around midnight the charge nurse came in to check on them. Bev told her, “Iola’s breathing has become shallow.”

Then she read Psalm 23, which was heavily underlined in many colors. After the Bible reading, she turned off the book light, and whispered in Iola’s ear.

Bev kept watch, cycling through the same comforting rituals until shortly after sunrise. She explained to Iola that her daughter was coming soon to say goodbye.

“It’s been a privilege to take this journey with you, thank you,” she said and then kissed her on the forehead.