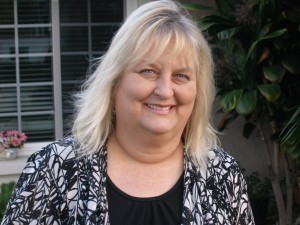 Donna Miller, Director of Volunteer Services at Hospice Care of the West, has brought together a multitalented group of volunteers to help hospice patients and their families across Orange and Los Angeles Counties. Photo by Jay Gianukos

Donna Miller is like a modern day shepherd with her flock of angels on call to serve hospice patients’ needs and wishes at Hospice Care of the West. As the Director of Volunteer Services, she creates programs dedicated to bringing families and multitalented volunteers together to birth memorable last moments for hospice patients. She transforms the wrenching hours of end of life into a time to reminisce, celebrate and hold hands with family, community and hospice volunteers who ensure no one takes this journey alone.

“Our goal is to help hospice patients continue to have joy, comfort, peace and company until their last breath,” she says to a new batch of volunteers during a weekend training at Hospice Care of the West, in Orange County. Donna’s long blond with a hint of gray tresses framing her round face, bright blue eyes and effervescent smile are a striking resemblance to the fairy godmother in the movie Cinderella. She grants last wishes in many ways.

At Hospice Care of the West, she has attracted a group of more than 40 volunteers willing to donate their time and talents to visit hospice patients in their homes throughout Orange County and Los Angeles County. She trains volunteers in hospice care so they can be compassionate listeners and companions at the bedside.

The musicians give music therapy that often bring the family together to listen to a guitarist, opera singer, a bagpiper or any kind of live music a patient wishes to hear. Massage therapists use special techniques to ease pain and bring relaxation.

The Supper Club volunteers are great comfort food cooks who bring dinner to patients and relieving their caregivers of having cook. She also has volunteers who will just sit with a hospice patient so the family and caregiver receive respite for an afternoon or evening.

Donna has trained a volunteer group of high school students at Tesoro High School called Dream Catchers, who make last wishes come true for hospice patients. The Dream Catchers have managed to take a sailor out for one last sail with his family on the Pacific. They reunited a brother in hospice with his sister from Seattle after six years. They coordinated last birthday celebrations and brought a gourmet dinner to the bedside of a restaurateur.

Most recently, Donna started training vigil volunteers a unique class of people who are called upon to keep watch and accompany a patient in the eleventh hour. They will stay all night reading inspirational books, giving hand massages and keeping watch until the last breath. The vigil volunteers often serve as family member surrogate for patients who don’t have anyone available to accompany them on this sacred journey. 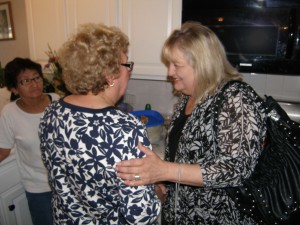 Donna Miller arrives a last birthday celebration for Fortunata Mirabel organized by the DreamCatchers, a group of volunteers making last wishes come true for hospice patients at Hospice Care of the West. Photo by Jay Gianukos

She also started a family portrait volunteer program that draws on the talents of local photographers to go out and capture one last shared family moment. After a patient passes, she calls on a seamstress to come to the family home and help the bereaved select an article of clothing from the closet of their loved one to be sewn into a memory pillow.

Often people ask her, how do you get all of these people to donate their time and talents. I believe that’s part of her gift. She has a vision of what she wishes to give to her hospice patients that she writes up into a small ad on Volunteermatch.org and Craigslist. Soon enough, the volunteers are in training and out in the community helping hospice patients.

The growth and success of these volunteer programs hinges on her decade of experience devoted to listening and being effortlessly present at the bedside with hospice patients. I’ve had the unique opportunity of following Donna for years as she visited with patients and their families to record life review videos. Like all the other programs, this one grew out of her time at the bedside.

About six years ago, on a September afternoon, she was on a hospice patient visit with Raymond Long, a 94-year-old Fullerton resident and World War II veteran, living independently in a small one-bedroom at Kimpel Manor, a senior citizen apartment complex. Since he lived alone, his hunger for food and people was insatiable. He always entertained Donna with humorous stories that illuminate his past life before he entered his current state of decline due to cardiac problems and cancer. She arrived at Raymond’s home with a burger and fries in tow because that’s what he was craving that day. Sometimes it’s mashed potatoes and fried chicken. She’ll cook him dinner at her home and then bring it over.

He wasn’t the first, but that day, as Raymond relived episodes from his past, in between burger bites, she wondered if his two daughters had ever heard

these sensory rich explorations of his grandmother’s garden, his grandfather’s lumberyard in Missouri, his blind-date in high school with the girl he asked to marry him and how proud he was to join a crowd of onlookers admiring his daughter on the frontline of all the newborns in the hospital nursery in Memphis.

In the not too distant future, Raymond would never tell these stories again, they’d be buried with him, lost and soon forgotten. She knew from experience that caring for a family member drains physical and mental energy, often depriving the family from spending time just sitting and reminiscing. Donna thought maybe she should just video record patients’ life stories to give to their families. She asked Raymond what he thought about recording his stories for his daughters. He liked the idea. On the day of his life review, she invited his daughters to participate in a reflecting journey. She brought a list of life review questions and video camera from home. She focused the video camera atop a tripod on Raymond and began with simple questions that triggered a magical two hours of the family coming together to reminisce and listen to their patriarch’s stories.

With the life review video interview, Donna carves out a time that allows everyone to come to the bedside and say what’s on their mind and

heart. She starts the interview by asking all family members present to hug and kiss Mom or Dad and to say anything that comes to mind. It breaks the ice and gets everyone warmed up for a heartfelt last conversation with Dad or Mom. She then takes that video and passes it on to video editor volunteers trained in cutting the raw interview into a life story complete with a montage of pictures and music from the family archives. The finished video is given as a gift from the hospice patient to his family.

The life review video program gave her hospice patients a priceless family treasure. Like many of these videos, she worked against time in completing the project before the patient’s last breath. One of her most memorable life reviews was Ed Williams dying of Parkinson’s disease. Since he was an artist, Donna took photographs of all the paintings that illuminated the walls of his home, including the painting of his cabin in heaven, where he hoped to travel to after this life. Ed’s wife Sheryl and his two daughters accompanied him while he retraced his life journey. He also collected trains and he showed Donna his train set out in the garage during the life review interview.

A week later, Donna received an urgent call from the hospice chaplain. Ed passed away and the family requested the video. Fortunately, Donna planned to pick up the video from the editor that day. So, she arrived that afternoon just before Valentine’s Day with a bouquet of red roses for Sheryl his wife. This was the first video that the honoree would not be able to see.  Sheryl came out of the bedroom and hugged Donna. Then Sheryl turned to the crowd of about 15 family members and friends.

“Alright, you guys,” Sheryl said. “Let’s everyone gather in the living room.”

Ed’s children and grandchildren cuddled on the couch. Donna slipped the DVD into the player, pushed play and then found a seat on the wide brown sectional. Ed appeared on the screen, his voice seeming to transmit straight from heaven behind the flickering slideshow of pictures from his younger years. Donna peered into the faces of his family and friends to see some crinkle with laughter and others glimmer with tears. At the end of the video, they all stood and clapped. Donna was filled with their raw emotions of gratitude. The timing was perfect. She showed up at the moment they all needed that most. Even in his death, his absence, in their grief and sorrow, everyone collectively felt Ed’s presence and celebrated his childhood, his career, his art, his love for his wife and children, and grandchildren.

As Donna stood in the midst of the applause with tears welling in her eyes, she thought,

“This is the proudest moment of my hospice career.”