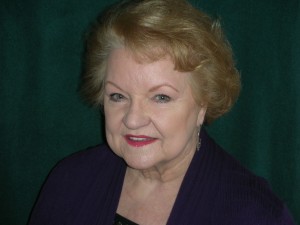 Gemma Heffernan, Social Worker for Hospice Care of the West

In the early 1980s, Gemma Heffernan greeted an elderly couple entering her office at Leisure World. As the Director of Social Services, she often met with seniors to discuss their special needs.

As they walked in and sat down, the husband took off his Captain’s cap. He hung his head while his wife talked about him as if he wasn’t there. He didn’t say a word. She discussed his dementia and their life before the crisis. He was a professor and a doctor. They travelled all over the world to lecture for large audiences that sought his knowledge.

As the conversation came to a close, Gemma said,

“Thank you so much doctor, appreciate all you’ve done.”

The husband stood and looked up at Gemma for the first time and then bowed.

Gemma instantly recognized a total transformation in his demeanor. In a split second, he was transported to a time when he was giving his lectures and people would come out to acknowledge him as doctor and celebrate his contributions.

At that moment, she made a realization.

“It was a change in the stature and behavior of the man that just hit me,” she said. “I said to myself, ‘Oh my God, I have to remember this, to always go back to the part of their life where they were celebrated.’”

This choice has brought her full circle in a distinguished career, devoted to the advocacy and service of seniors, which began as a social worker in hospice and home health at Saddleback Hospital.

Gemma emigrated with her husband and two sons from Ireland to live in America during the late 1960s. Her husband started work at MGM Studios. She dreamed of becoming an elementary school teacher, but a downturn in demand for teachers changed her course to help folks on the other side of life. As she completed her Masters degree at University of Southern California, she started as social worker helping families deal with crisis of terminal illness.

At that time, the hospice movement was in its infancy. Many families and physicians felt that hospice was just a deathwatch for the patient. This was tough.  After witnessing the first deaths of her patients, she realized they were wrong.

Hospice was about the continuity of life—this realization came as she planted a garden in her new San Juan Capistrano home. She listened to Mozart and Beethoven and realized that they lived on through the music they left behind. It was then she changed her focus to fortifying the family through the crisis to give the best care to their mother or father, while ensuring that the family was still standing and continue on after the death.

She listens to the families and helps those members in acute distress or suffering from anxiety because they’re not ready to let the loved one go. Often times, she connected families to services communal, psychosocial, spiritual, financial, veteran affairs, bereavement and funeral that ease the journey into end of life for all involved.

Some folks she helps connect with old acquaintances or family members to make amends or come to a reckoning with unfinished business. This holistic approach of sorting through issues helps patients and the families prepare for and find peace in the final hours of life.

As she watched the continuum of life in her blooming garden and listened to music, she often thought of her grandmother who raised her and introduced her to music in Ireland. She had to leave behind her grandmother when she came to America. Gemma was not able to care for her “Nana” in the end of her life. Gemma’s devotion and reverence for seniors is motivated by her grandmother. After 10 years in hospice and home health, she moved to Leisure World.

As Social Services Director at Leisure World in the late 1990s, she started a nonprofit organization called the Leisure World Foundation now renamed the Laguna Woods Foundation to provide seniors with assistance for transportation to and from doctor appointments, Meals On Wheels or anything that they had to pay for out of their own pockets such as a water heater for the home or services Medicare couldn’t pay for. Prior to the foundation, she and other social workers would use their own money to help seniors. The foundation that she is so proud of has become the largest donor to South County seniors. At Leisure World, she also had her own television show on Channel 6 that focused on senior issues.

In a way, her “Nana” lives on through her mission to help seniors in need.

Now at Hospice Care of the West, she continues to educate the community that hospice is about continuity of life. Though she may not have become an elementary school teacher, Gemma is a wise educator. As she reflects on her journey that led her back to hospice, the most satisfying moments of her career have been serving patients and their families. Often the nurses in hospice are focused on the physical needs of their patients. As a social worker, Gemma is able to step in at the bedside to just listen.

“I’ve met the most astonishing people,” Gemma said. “And, they always love to tell their story.”

She recalled recently sitting at the bedside of Mary Burchard, a World War II female pilot. Gemma read parts of Mary’s story captured in her life review video that was written about in the OC Register. Mary was bright and full of zest listening intently to her life story being read to her. Then Gemma said to Mary,

“You’re an inspiration, you’re a trailblazer, you did this at a time

when women weren’t doing things like this. Anything we’ve accomplished we’ve done it on the shoulders of giants. You’re one of them.”

“Did you know I was a doctor too?” Mary said.

“Yes, I know and you left it all to serve your country,” Gemma said

In that instant, Gemma lifted Mary’s spirit. She transcended the dementia and beamed with glory.