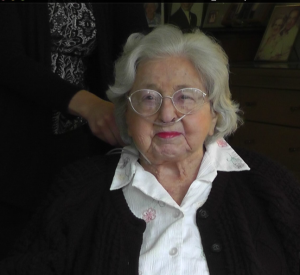 Marie Lasher, patient of Hospice Care of the West, shares her life stories and wisdom in recorded life review video to give as a gift to her family.

At 102 years old, Marie Lasher dresses for the premiere of her life story in a small movie theater near her Laguna Hills, California home. Shannon Sirovy, Director of Volunteer Services of Hospice Care of the West, accompanies Marie in a wheelchair into the elevator. As they enter the elevator, they see posters of Marie on the wall inviting the community to her movie. Yvette Aiello, the volunteer editor of Marie’s life review video, joins them.

As they enter the movie theater, Marie receives a red carpet welcome.

Friends surround her from the community she has lived in for three decades. As she basks in a wave of embraces and endearments from friends, she shines like a star in the spotlight. Wafts of fresh popcorn fill the theater as the guests sit take their seats. The theater is full.

“This is all for me,” Marie says in a coy voice.

As the lights of the theater dim, Marie shows up on screen. And she watches herself on the silver screen retrace her life’s footsteps, stories and lessons that began in Ohio when she was born. Marie shares her personal history and journey that led to the life review interview video recorded by Shannon, Director of Volunteer Services at Hospice Care of the West, just a few week before.

On that memorable afternoon shortly after Marie entered hospice care, her bedroom is transformed into what appears to be the dressing room of a movie star. A video camera is on a tripod set up and make-up is being applied to her face.

Marie selects a red lipstick. She beams like a super star.

“I think that will show up better on the camera,” Marie says directing Shannon to put on her lipstick. “I’ll see if I can employee you as my make-up artist

“Alright, Go like this ‘muah’,” Shannon says. “Rub them together.”

“You look beautiful,” says the audience gathered around her in the room.

“Do you want me to wear the oxygen?” Marie says pointing to the oxygen cannula piping oxygen into her nose from a tank.

Tracy Filowitz, of Hospice Care of the West, behind the camera, assures her that it’s not too noticeable on camera.

Shannon tucks a life alert tag into her shirt and straightens the collar around her sweater.
“Should I wear the sweater?” She asks.

“However, I look the best,” she says beaming into the lens of the video camera.

“You look great,” Tracy says from behind the camera. “You look beautiful.”

“You look on here, that’s a good choice of lipstick,” Shannon says as she views the moving image on the video camera.

Shannon sits beside the video camera and begins the interview with asking Marie’s name and birth details.

“And what city were you born in,” Shannon asks.

“I was born in Cleveland, Ohio,” Marie says.

“Do you recall the name of the hospital, you were born in?” Shannon asks.

“Honey, a mid-wife probably delivered me,” Marie says. “ In those days it was really more mid-wives than hospitals.”

“More visual to me, I can see myself as a little

girl, about 5 to 6 years old, I can’t remember anything spectacular, I know I was a tomboy, and I would jump from our porch to see how far I could jump. I was raised with three brothers.”

The phone rings interrupting the interview.

“Honey, I’m being interviewed, you didn’t know your mother was a popular woman, but they are interviewing me from hospice to get a little bit of my life history,” she says to her son, Lewis, calling from Denver, Colorado.

“I want a copy of everything,” says her son on the phone line to his mother. Marie repeats it to Shannon, who shakes her head saying absolutely, that is why she is doing it for Marie’s children and grandchildren. The life review video interview conducted by Shannon is a gift given to the hospice patients and their families by the volunteer services at Hospice Care of the West. A life review interview retraces the footsteps of a person’s life from birth to childhood, young adulthood to falling in love, lessons learned to chosen religious paths, parenthood to grandparenthood, to wisdoms and hopes and dreams to pass on to the next generation. This life review video is then edited with music and pictures to be passed on so the hospice patient like Marie Lasher knows a tangible legacy of memories and wisdom will live on for her children and grandchildren, great grandchildren and so forth.

“Okay, you’ll get it,” Marie says to her son and hangs up the phone.

“Proceed, she says to Shannon.

Marie shared the story of how her family coming to America from Hungry and Austria. Those of her family that stayed behind, she laments were killed in the gas chambers when the Nazis invaded Europe during World War II.

that brought the family together in America. She knew all her aunts and uncles. Pinochle brought together not only family but also friends from the neighborhood. The gatherings punctuated her childhood while also setting the course for her adulthood. As it was during one of these games that she met and fell in love with the man who would become her husband in 1944 and her son, Lewis, was born in 1945.

“So, you should start counting,” she chuckled. “As is the usual thing with people, when the child is born a little early…” Marie starts counting on her fingers.

“I had a lovely life,” she says smiling.

Her husband owned a bar called “Wander Inn” she said everyone in the neighborhood would say “wander in, stagger out…Though if anyone was drunk in their bar, my husband or his brother would drive them home, they never let them walk the streets.”

Her husband learned the trade of jewelry from her father who was a manufacturing jeweler in New York City. The jewelry business translated to her husband becoming a traveling salesman.

“I had a lot of fun with him,” she says. “We use to showdown at the Biltmore Hotel. I use to work with him selling jewelry.”

Since her husband was out of town a lot, she was a father and a mother to her son, Lewis. She spoke of keeping the books for her husband’s business as a jeweler.

“I took him to his baseball games,” she says. “I was a scout mother, I had the scout meetings at my house. I was active in the PTA in the elementary school, junior and senior high because I felt it was my duty as my mother.”

Marie like many women today struggled to care for her son, her aging father, keeping her husband’s books and working as a secretary.  Eventually, she became a senior clerk in Los Angeles County Adoption Services.

Marie’s religious life began from the day she was born into a Jewish family. Her mother kept a Kosher home. She attended a synagogue in her youth and was married in that synagogue in Ohio. Later, when she migrated to California because of her son’s asthma, she and her husband joined a synagogue in Los Angeles. Marie dedicated her life to volunteering in the temple and also civic duty.

“I enjoy being a volunteer,” she says.

Marie talked about how her parents observed the holy days and how they attended services in the temple at sundown. She remembered as a child always receiving new clothes for the holidays. Marie pulls out the Bible that she carried and read as child in Sunday school. During an earthquake, the Bible was ruined. And her niece recently had it restored and re-bound with her family history, which make the book valuable at so many levels for Marie.

Marie then looked directly into the camera and said as if to the next generations.

“Know your parents backgrounds,” she said. “And what they did, if you can make a recording like this, you will be amazed in later years. You don’t want to be left asking why didn’t I ask mom or dad this. If you ask now, you’ll know for the future.”